Being the mom of an 8 months old baby in Stuttgart 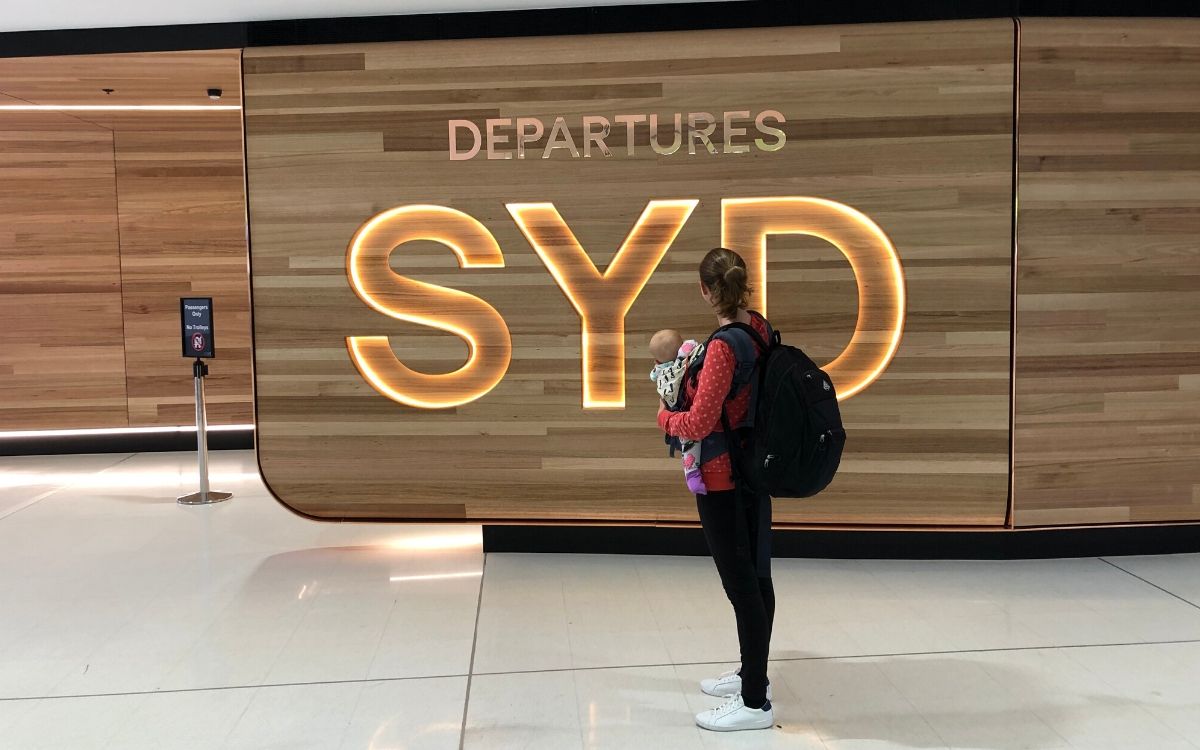 These are difficult times. It is super strange being the mom of an 8 months old baby in Stuttgart without being able to go out and meet other moms or participate in mom- or baby groups. On the other hand, life with an infant is never dull so I don’t suffer from boredom as some of you guys who have to stay at home all day and don’t know what to do with all the free time. Here comes my personal mom-life update in times of Corona.

We are back home in Stuttgart from our Elternzeit adventure in Australia. When we realized that all major airlines are cutting back their international flights we instantly looked for an earlier flight home. It was a nightmare, 2 (!) airlines cancelled on us. But eventually we arrived home safe and healthy – and that’s what is most important these days.

As most of you know, we have spent 2 months Elternzeit in Tasmania, exploring the island in a motorhome with our little one. The plan was to stay in Sydney the third and last month of our trip but this didn’t happen anymore. Oh well

We eventually booked a non-stop flight from Sydney to London with Quantas. There is only a short stopover in Singapore to refuel the aircraft. From London we took a British Airways flight to Frankfurt, from there we drove back home to Stuttgart with a rental car. We were traveling for 35 hours straight. Nothing I ever wanted to do with a then 7 months old baby (the original plan was to break up the flight and to stay in Singapore for 4 days but, oh well…). 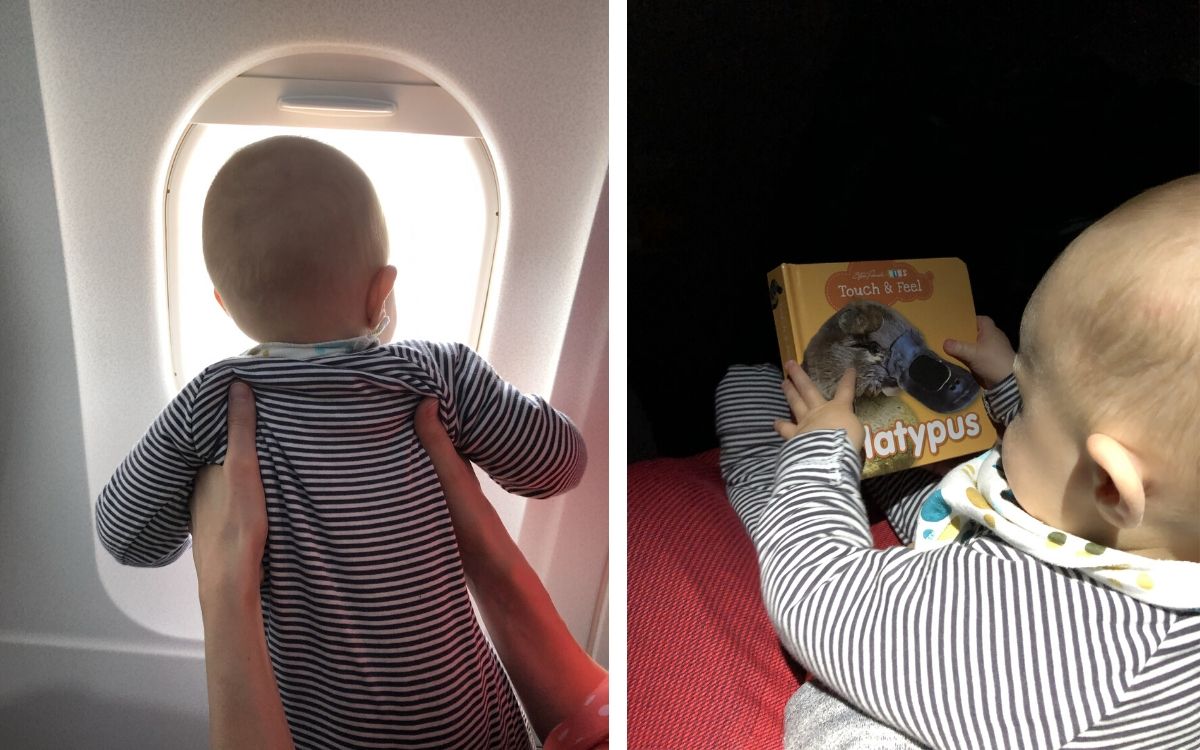 The little one did surprisingly well during this odyssey. We had a lot of toys and books with us on the planes so we could entertain her for some time. And she also slept in the baby cot. But obviously there was also some crying as 35 hours are just too long for a baby to sit still or sleep. But in the end it is astonishing how babies adopt to nearly anything as long as they have their parents around. She was bored at some points, yes, but there was not one moment where I thought she is not feeling well.

How is the little one at 8 months?

According to The Wonder Weeks [affiliate link] – one of the few parent books I really like and value highly – she is going through a development phase at the moment. And we can tell! She has troubles falling asleep and she wakes up more often nowadays, too. Seven times one night two weeks ago. That was bad, I felt like a zombie the next day – well, actually the whole next week! 😉 And she is in a mood very often during the day. She used to be a very happy baby, now there is a lot of crying. But the good thing is: it is only a phase and we will get through through it eventually (see how I’m working on my positive mindset here ;-D)?!

When we came back from our Elternzeit trip we introduced the second purree to her diet. We now feed her vegetable-meat purree for lunch and milk-grain-fruit purree for dinner. We have noticed that this must have a huge effect on her digestive system which might actually increase her sleeping problems. There is a lot of air my friends…

But the main novelty now that she is 8 months old: She is crawling! Hurray! Not on there knees yet but on there belly. She is using her arms mainly and boy is she fast! From now on we can’t let her out of sight for one second. 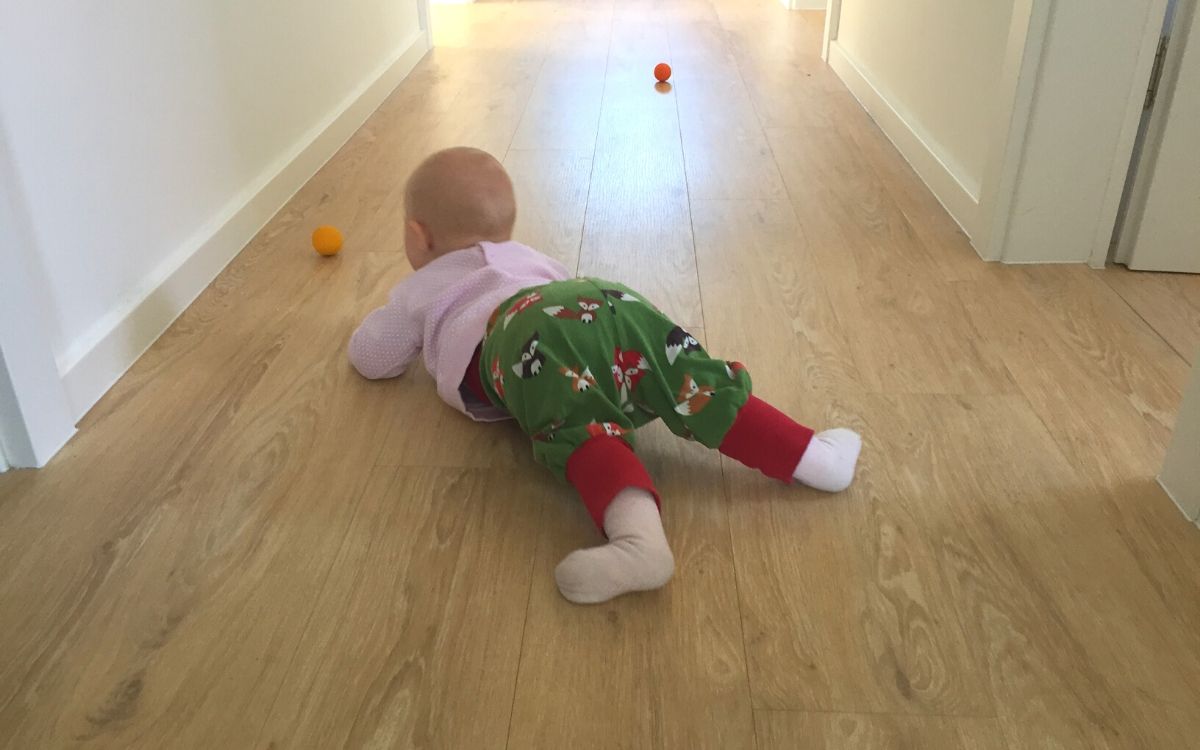 We often play a fun game together: We have these colorful wooden balls from Grimm’s [affiliate link]. And we have a long hallway. Can you put it together 😉 We sit on the one side of the hallway (well, I sit, she lays flat on her belly) and I roll the first ball. Not too far, otherwise she is not interested in it anymore. She starts crawling, reaches the ball, turns around and lifts the ball up in the air and laughs. Too sweet!! Then I roll the second ball, a bit further. She goes for it. I roll the third, fourths, fifth… It is so much fun to be able to play games with her now! My big girl 🙂

Oh, and she is able to sit by herself now, too. This is too cute and it makes her look like a toddler so much. 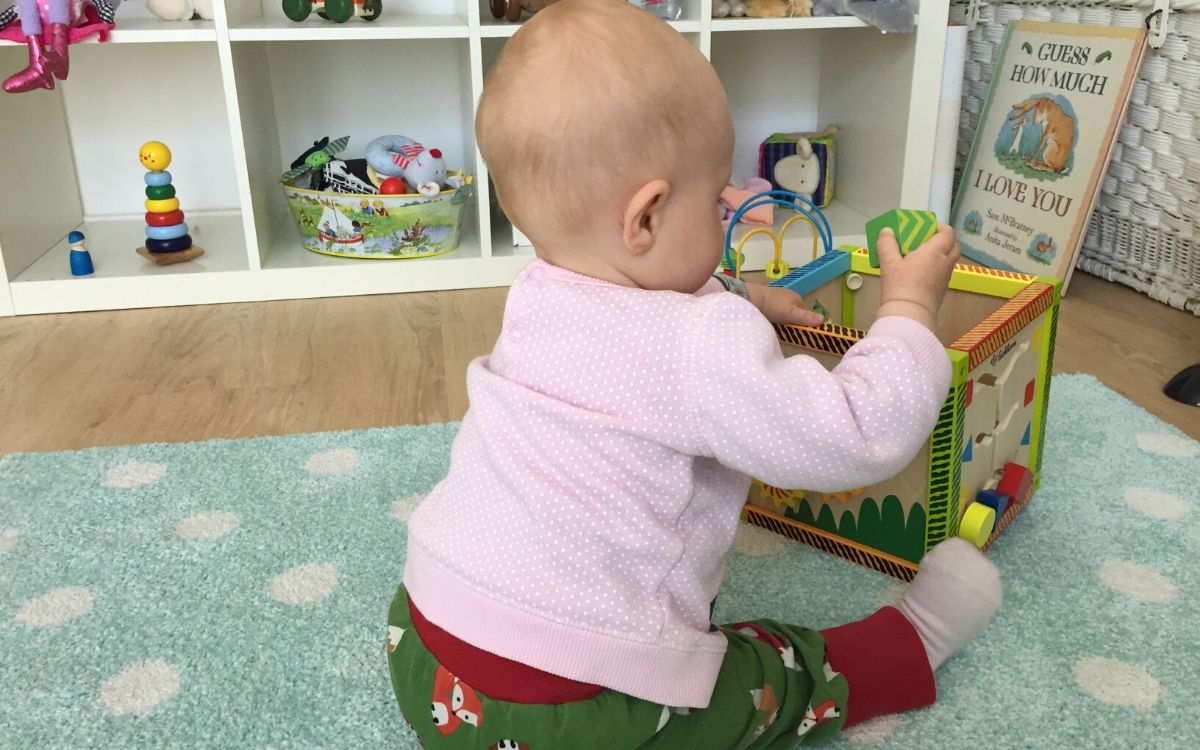 How is mom-life in times of Corona?

A bit lonely I would say. I really miss meeting other moms and going to play dates and such. I guess the little one is too young to suffer from the isolation but I would love her to meet other babies her age again.

And it is of course also a bit tricky to balance the time you have between looking after the little one and getting some work done. Obviously I can’t offer my German Conversation Groups in bars and restaurants anymore. But I have started Online German Conversation Groups and they are actually a lot of fun, too! So if you are interested in improving your spoken German while sitting at home in quarantine, contact me! 😀 I am doing groups and individual meetings now. It would be lovely to talk to you! 🙂

I was also about to offer some fun courses at vhs stuttgart but I don’t know if they will take place or not. It depends on the German government and if they allow Volkshochschulen to open again. We will see…

Anyway, all I want to say is that mom-life is definitely a lot different at the moment. Other moms out there: How are you dealing with the situation? How do you organize your days in times of Corona? I would love to read about your experiences in the comments. 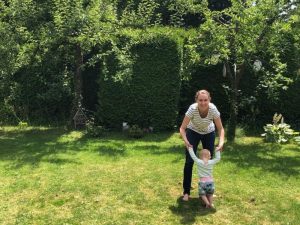 Being the mom of an 11 months old baby in Stuttgart 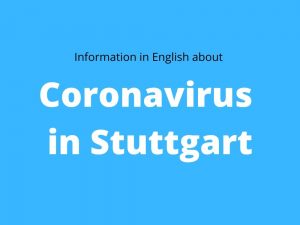 Overview about Coronavirus in Stuttgart in English 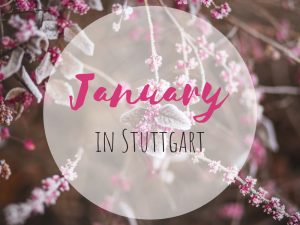 Events this January in Stuttgart